The New York Times speaks to Evgeny Lebedev about London, theatre and his plans for a New York office for the Independent online

To reach Evgeny Lebedev’s home takes some planning. Technically, the Stud House, as it is known, is in London: a private residence on the grounds of Hampton Court Palace, set in the grasslands of Bushy Park, where deer have roamed freely since Henry VIII was in residence.

Unless you want to walk a mile to the entry, however, you cannot take public transit; the only way to get there is by car, and even then the journey takes two separate codes punched into a GPS unit: one for the correct turn off the main road, another for the house itself.

“It’s a country house in London,” said Mr. Lebedev, a Russian-born 34-year-old commonly attached in gossip columns to the word “billionaire.” But, of course, it’s not. The house is, under Mr. Lebedev’s ownership, also a symbol: of the complicated transformation of London into a nexus of global wealth and power, and the equally complicated way the British feel about their now international city, and those who have migrated to it.

It’s easy to tar Mr. Lebedev: He has bought his way into the heart of British royal heritage (he purchased the centuries-old Stud House in 2007 and has just finished four years of complete renovation), media (Mr. Lebedev is the owner of four British newspapers: The Independent, The Independent on Sunday, the bite-size offshoot i, and The London Evening Standard) and culture (as a host of the recent Evening Standard Theatre Awards, along with Anna Wintour and Christopher Bailey, the C.E.O. of Burberry, the sponsor).

But then, Mr. Lebedev has also lived in London for two-thirds of his life and now holds British citizenship. His father, the oligarch and former K.G.B. agent Alexander Lebedev, co-owns Novaya Gazeta, a rare Russian liberal paper with the bravery to speak its mind.

And before the younger Mr. Lebedev started his media empire, he studied art history at Christie’s in London. His interests are varied, and his commitment to them is financial and personal. His friends, and he has many, would cast him as a young man lucky enough to have the means to pursue the polymath life of his dreams.

Before the Lebedevs bought the then-loss-making Evening Standard for £1 in 2009 when Evgeny was 29, its theater awards were held at a lunch. “It felt very much like a business engagement,” Evgeny Lebedev said. “People came, got their award and left. I think by far the evening is much better. When it gets dark, the psyche changes somehow.”

One person apparently impressed by the change is Ms. Wintour, the artistic director of Condé Nast and the editor of American Vogue, whose father, Charles Wintour, the former editor of The Evening Standard, started the awards 60 years ago. “You can just feel the excitement and camaraderie in the room,” Ms. Wintour said. 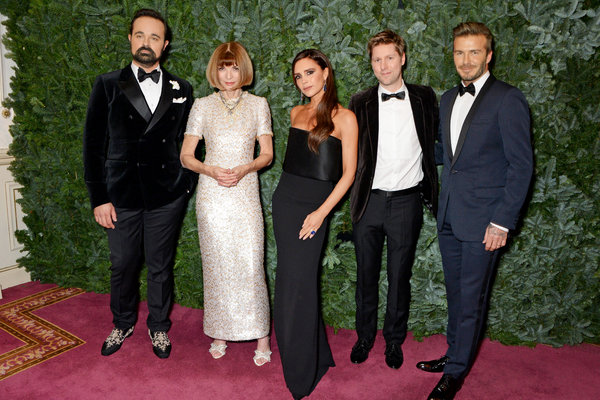 Mr. Lebedev has been something of a British fascination for the last five years. To some, a Russian buying a British newspaper was evidence of national decline. “I think it’s one more example that we are no more a serious nation,” said the right-wing establishment journalist Peregrine Worsthorne, when the Evening Standard sale was announced.

Others were preoccupied with how his father made his billions in late ’90s Russia (banking and gas).

And then there was the gossip: the celebrities Evgeny is said to have dated — Joely Richardson, Geri Halliwell — or the lusciousness of his thick and perfectly groomed beard.

Indeed, during the theater awards, the presenters Steve Coogan and Rob Brydon, British comedians who starred together in the Michael Winterbottom movie “The Trip,” made the beard a subject of their jokes, comparing Mr. Lebedev to a hirsute Action Man doll.

His London social circle includes Ian McKellen, with whom he owns an East End pub; Kevin Spacey, in his final year as artistic director of The Old Vic theater; and Nicholas Hytner, the outgoing director of the National Theatre in London. Patrick Kinmonth, the opera director and designer, worked with Mr. Lebedev on the refurbishment of the Stud House.

Witness the house. “It had last been touched in the ’80s,” said Edward Hurst, an antiques dealer and interior consultant who was also involved in the renovation. “It was looking pretty sad, very much in that beige rag-rolled style, rather hotel-like.”

Now it includes what Mr. Lebedev calls the Soane Room, inspired by the lavish interiors of Sir John Soane’s Museum in Central London. “I nicked this room from there,” Mr. Lebedev said. “The notion of the suspended handkerchief, which is the ceiling, is very much his invention.”

The room’s ceiling also features an oculus: a circular opening in a dome. Mr. Lebedev’s oculus is lined with shards of blue amethyst. Are there such crystals in the John Soane’s?

“The three of us collaborated all the time,” Mr. Kinmonth said. “Evgeny was there saying: ‘This isn’t beautiful enough. Can we make another suggestion?’ He was very involved aesthetically with all the choices. There are four roundels I had planned to paint as lapis lazuli, but Evgeny said, ‘If we want lapis lazuli, why don’t we get the real thing?’ ” And so they did.

Mixed up with the antiquities is Mr. Lebedev’s collection of contemporary art. His taste errs toward the bombastic: Two life-size Antony Gormley sculptures stand sentry in the entrance hall, overlooked by a Damien Hirst. A ghostly cast of a dress by Anselm Kiefer sits at the end of the east reception room.

“There’s a tension between his art collection and the classic architecture that I’ve tried to reinforce and enhance,” Mr. Kinmonth said, with some understatement. It is a tension that informs Mr. Lebedev’s life.

Much of him is Old World. He talks of how the Old Vic was almost “turned into a disco,” and describes being taken to the theater in Moscow as a child by his grandfather. “My parents were very young, so my grandparents were bringing me up. We went to see ‘The White Guard’ by Bulgakov, and I remember sitting there vomiting into a plastic bag. I was 7 or 8. I think I ate some rotten caviar in the morning — not that I grew up eating caviar.”

Yet his newspapers are progressive. He has employed the first nonwhite editor of a national newspaper in Britain: Amol Rajan of the Independent. Two of his editors are women: Sarah Sands of The Evening Standard and Lisa Markwell of The Independent on Sunday. His staff is often unflinchingly young: Mr. Rajan and the i editor Oliver Duff are both 31.

“They were the people who I felt fitted best to edit those papers,” Mr. Lebedev said. “There are still lots of young people who want to come and work in newspapers.”

In the decline of print, Mr. Lebedev has found a sweet spot through pricing. His whittled-down version of The Independent, i, is 30 pence (about 50 cents) each day, compared with £1.40, about $2, for the main newspaper. The Evening Standard is free, its revenue derived from advertising. The paper claims two million readers daily.

Founded in 1986 as a newspaper of disciplined liberal thought, The Independent has softened over the years but has recently had some of its bite restored. “Amol is really taking The Independent back to what it was,” Mr. Lebedev said.

The Independent says its online readership is up to 35 million unique users, an increase of 87 percent over last year (35 percent are in the United States). Mr. Lebedev plans to open a New York office for The Independent within the next three months.

“We’re really going to focus on the U.S. market,” Mr. Lebedev said. “In some ways The Independent is a very American-style newspaper, because it’s very international, very outward-looking, like The New York Times or Washington Post.”

Does that mean Manhattan is about to get another media mogul expat resident? “New York is fabulous,” Mr. Lebedev said, “but I feel living in New York would be a bit too far from the motherland.”

An earlier version of this article misidentified Charles Wintour’s former position at the newspaper. He was the editor, not the deputy editor.
Evgeny Lebedev is the owner of The Independent and Evening Standard newspapers. Follow him on Twitter:  @mrevgenylebedev