We ask the children to draw a picture of their life. It’s a man beating them: Special report on modern slavery

The entrance to Lydia House, on the outskirts of Addis Ababa, is marked by two red buckets filled with flowers. A metal gate opens onto a courtyard, where girls, some as young as eight, are waiting happily for a turn on the ping pong table that sits in the shade of a tall tree.

There is no hint of the miseries these brave children have endured. Yet this is one of the centres run by the charity Retrak, which provides support for trafficked children. Here, with the help of British funding and expertise and with the backing of the Evening  Standard’s anti-modern slavery initiative, some of Ethiopia’s most vulnerable children are being given a fresh chance. As our special investigation comes to an end, I wanted to see their work for myself.

When these young girls are picked up, from houses where they are working or on smuggling routes, often by the police, they can be referred here, where they will be safe from traffickers and taught the skills they need to reintegrate into society.

“When we ask the children to draw a picture of their life, the first one they draw is nearly always of them cowering while a man beats them with a stick,” Lynnette Kay, the Australian who  manages Retrak’s operations in  Ethiopia, told me.

“Most have been brought from rural communities by extended family, with the promise of work in Addis Ababa. Then they are sold to another family, and trapped in the house, not allowed to leave, harassed by male bosses and working 10-12 hours a day.” From there they can be trafficked on further: to the Middle East, Europe, and even the UK.

The latest research says 46 per cent of trafficked Ethiopians originate in rural areas. Despite the remarkable economic strides the country has made in recent years, parts of rural Ethiopia remain among the world’s poorest, and for many families the lure of money from more prosperous cities or countries is a powerful incentive. Yet too often, I learnt, children end up in the hands of exploitative and abusive criminals.

Over the past two months the Evening Standard’s special investigation into modern slavery has shown how the UK, and London in particular, is a hub for trafficking from all over the world. We have encouraged corporate leaders to pledge diligence over their supply chains, and highlighted the challenges facing support providers and law enforcement agencies.

I’m delighted that in the new year our think tank will present recommendations at the Santa Marta conference in Rome, one of the world’s leading forums on this terrible crime.

Any effort to support victims and improve law enforcement in the UK counts for little without an equal effort in source countries to prevent these young people from being trafficked in the first place. Impressively, Retrak’s work is being funded in part by the Modern Slavery Innovation Fund originally established by Theresa May when she was at the Home Office, which is providing £780,000.  It’s not the only assistance provided. The Ethiopian government, led by the First Lady, has been seeking to help abused children. Furthermore, every year a delegation of volunteers from Greater Manchester Police comes out to help the charity. British officers visiting last week found the local law admirably rigorous at clamping down on  trafficking. Domestic work is another matter. The use of children is so widespread that, despite the government seeking to crack down, often no  prosecutions are brought. 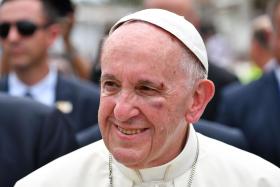 The Standard’s slavery panel to present findings at Vatican conference

Emenet Tadesse, one of the counsellors, who’s from Addis Ababa and has worked here since 2011, tells me that despite Retrak’s efforts the situation is deteriorating, mainly due to the  poverty in the Ethiopian countryside. “The UK people are doing their best to support the life of these children to improve their lives as this problem is getting worse. We appreciate it — and long may it continue — but while it’s a significant help it’s not enough. In just one district of Addis Ababa, there are 1,000 children living as domestic workers.”

Yet from what I saw at this wonderful centre, I am more committed than ever to our cause. Modern  slavery, in all its forms, is a horrendous crime which has no place in our world. Wherever we see it, we must stamp it out, and do what we can to support the victims. Hopefully the work this paper has done over the past few months will help that process. While at the centre I saw a picture drawn by a girl who had been helped there. It showed her life before and after her arrival at Retrak. “The old life” drawing shows a figure cowering under a beating, sweeping floors, cooking and washing and in tears. In the picture of her life at Retrak, she is playing with her friends, reading a book, and walking to school. This time there’s a smile on her face. I am proud that Britain, and all of us here in London, have been able to support such work.